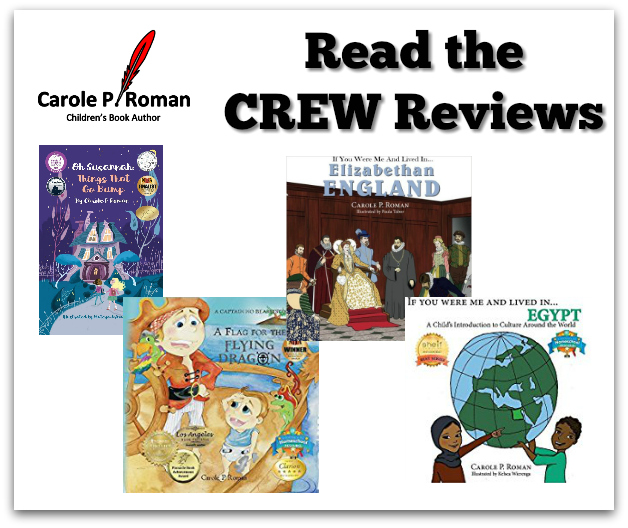 This article is in collaboration with Carole P. Roman.

Do your children ever wonder what it would be like to live in another time or place? Maybe they love stories of princesses, pirates, and great adventures. If this is your family, then you will want to check out the books by Carole P. Roman. Our Review Crew families have had the chance to look at Carole P. Roman’s assorted series and all the great adventures they hold.

Carole P. Roman is not only an award winning author, but she is a mother, grandmother and a former social studies teacher. She draws on all of these experiences to bring her stories to life and make them true family treasures. Helping children is the goal for all of her books. Children are exploring their worlds, and Carole P. Roman books help them do just that.

The Captain No Beard series deals with the concerns of childhood in an engaging and fun way. Alexander is normally a typical young boy, but when he and his friends board his bed, a pirate ship appears and great learning adventures begin.

If You Were Me And Lived In… Cultural Series

This series will bring your child on a trip around the world visiting such places as Russia, Norway, Mexico, France and more. Each book shows the reader what it would be like to live in that particular country providing a window into the dress, language, food and culture.

If You Were Me And Lived In… Historical Series

This series is very similar to the If You Were Me And Lived In…Cultural Series, except that you are transported back in time to various important dates in history. Your child may meet the ancient Greeks, visit the pyramids in Ancient Egypt, or see the Han Dynasty of Ancient China.

This series is wonderful for children that need to learn about big feelings. In these books, the main character Susannah figures out the wrong and right ways to deal with her emotions. If your child loves to color, Susannah is also a coloring book.

Thank you to Christine Howard of Anything But Ordinary for this introductory article.

Read what the Crew thought

What are you planning on teaching today? ⁠ ⁠ A

The Favorite Preschool Product for 2021 was Baby B

"Math! Ahh…I usually cringe at the word. But why

Ever wonder what it would be like to homeschool in

Do you take the opportunity with the changing of t

In 2021, the Crew Favorite was Creating a Masterpi

The New Year. The time when people look forward to