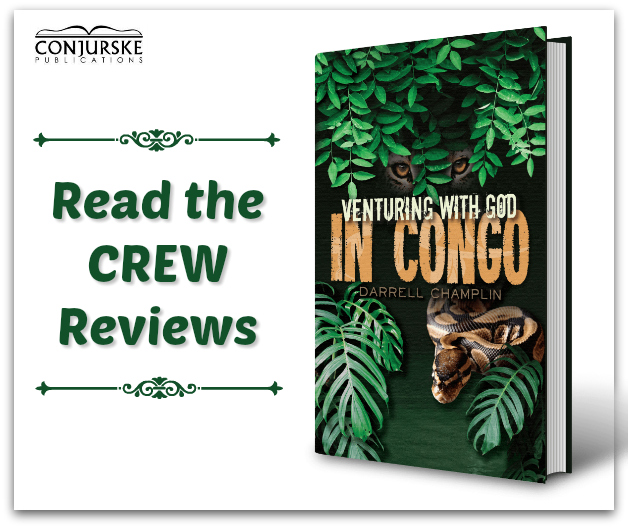 This article is in collaboration with Conjurske Publications.

Reading about a missionary’s life can sometimes so inspire and impact a young person to make that choice to give all for the Lord. Darrell Champlin’s memoirs, captured in the work Venturing with God in Congo published by Conjurske Publications, is a work that can be part of that inspiration.

Members of the Homeschool Review Crew received a hardbound copy of Venturing with God in Congo. The book is 290 pages, includes pronunciation tips for the Lingala language, an introduction from Darrell, and an epilogue from his wife Louise.

Darrell Champlin and his wife Louise spent 10 years as missionaries starting churches and bringing souls to Christ in the Congo in Central Africa during the time period just before the Congo Crisis.

Venturing with God in Congo is a recounting of their work in that foreign land.

Gaining hands on practical experience on the streets of Los Angeles Darrel Champlain met his life partner in school, married, and sailed off for their mission field. For ten years the Champlins preached, ministered, and experienced God’s hand in a land familiar to one and foreign to the other.

Forced to leave during the Congo Crisis, which happened after the Congo, known today as the Democratic Republic of the Congo, became independent from Belgium. The Champlins feared their work was lost. It was a time of upheaval and civil wars as the small country struggled to come together as an independent country and missionaries were not welcome.

But decades later Louise Champlin was able to return and see for herself that the work she and her husband did for Christ’s Kingdom was not lost.

Readers young and old will be touched by how God uses ordinary people in far away places.

A big thank you to Kemi Quinn of Homemaking Organized for this introductory article.

6 thoughts on “Venturing with God in Congo Reviews”