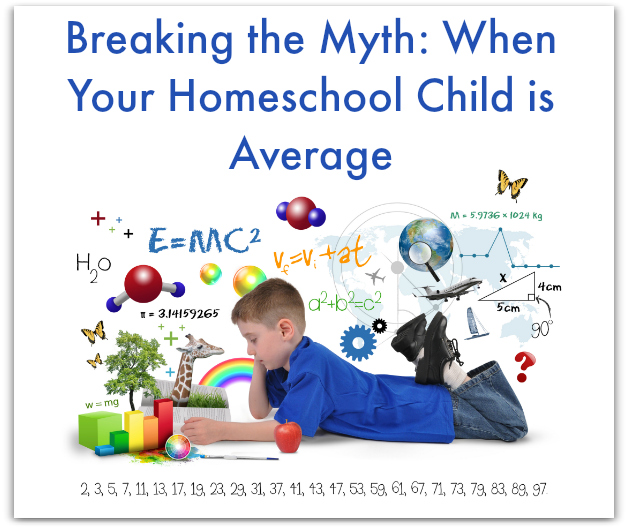 “Your kids must be geniuses!”

It’s a common response when people learn we homeschool (or roadschool, in our case). They think that because we’ve chosen to forego the common educational route, either our kids have special needs or they are or will become highly above average—genius, if you will.

Let’s annihilate the myth (a.k.a. unrealistic expectation) that all homeschooled students are on one end or the other of the educational bell curve. I’m not going to quote statistics or get all sciencey on you. Rather, I offer a realistic (and refreshing) perspective on the fact that the majority of homeschooled children are…wait for it…average. And that’s okay.

I have a child who “dropped out” of high school at 16 so she could get a jumpstart on college. She graduated with an entrepreneurship degree at age 19 in just over two and a half years. She now runs her own portrait art business. She is and always has been highly driven and organized. It’s her nature. We guided her, but she did the work.

I also have children who have absolutely no interest in college or the career world. Some of them excel in their studies, some don’t. Some excel in one area, but not another. Some just plug along at an average pace at everything scholastic. Again, same parents, same environment, same schooling, different people.

Some people are driven to pursue formal education, others to serve on the home front, others to travel the world, others to die where they were born a hundred years earlier. Just because you place an individual in a homeschool setting does not automatically turn that individual into someone he or she is not, i.e. a genius. Tom Sawyer might never become Albert Einstein because, get this, he’s Tom Sawyer. They are who they are, and that’s a good thing.

2) It’s not the schooling that produces geniuses.

Dare I say it? Will there be pitchforks and flaming torches at the next homeschool convention? Homeschooling in and of itself does not create geniuses.

What homeschooling (and any other form of education) does, if done properly, is create a lifelong love of learning. If you can successfully take that curiosity that every child and cat is born with and you feed it with interesting books and nourish it with exciting adventures and grow it with freedom to explore, your child will explode…in a good way. He will reach potentials you had no idea he could reach…even if his name is never on a degree or ballot or anywhere else the world recognizes as a brilliant success.

I was once told that if the right person gets hold of any child by a certain age, they can make that child a genius in one area. Wouldn’t your child be better served by being offered a rich buffet of life that keeps him coming back for more? That’s my goal for my kids—feed the love of learning so they keep coming back to the buffet.

3) No homeschool child is ever behind…even when she is.

One of the main reasons a person homeschools a child is for that child to receive an individualized education. That means the parent/teacher reaches the child where she is. If she’s in second grade math when she “should” be in fourth grade math, then the child studies second grade math. She progresses at that level instead of floundering in her “proper” grade.

That child will “succeed,” because she’s where she is meant to be. She will most likely pass up alternate-reality-her, because she’s not burdened with struggles that she’s not developmentally ready for yet.

Many homeschool parents agree that not freaking out over “behindedness” builds a stronger foundation which helps kids launch further in the future. The students (mine anyway) are not pushed through the system just because the calendar says they’re a year older. They learn at the pace that’s most beneficial to them, which often means they are “behind,” which is code for “preparing to launch.”

Some children appear to be geniuses, when in reality it’s the flexibility of homeschooling that allows them to blossom in their area of expertise. Let’s take a look at my kids by way of example. Our 16-year-old college student had the freedom to jump ahead because we didn’t hang excessive educational requirements over her head. She was free to pursue what she knew she wanted to pursue. The same goes for her older sister. She was free to write and sell articles because she didn’t have to meet unnecessary standards in areas that would not prove useful to her ultimate goals.

Are they geniuses? It might look like it, because one graduated and started a business at 19 and the other was selling articles and completing novels by the same age. But the reality is that they had the freedom and time to pursue their interests and goals and to hone their skills. Any child fed the buffet will find one area more palatable and spend more time there. That child will consequently grow more in that area than a child who is only allotted a certain amount of time there or one who is forced to be there. See? Not genius—just free to be themselves.

Each homeschooled child is really great at some things and pretty stinky at other things…just like every other child who has ever lived. Yup…average! And that is totally okay.

Christy Bagasao blogs about simple, joyful living at The Simple Homemaker and shares her family adventures roadschooling their nine kids full-time at The Travel Bags.

5 thoughts on “Breaking the Myth: When Your Homeschool Child is Average”

"Christmas: a time to love, spend time with family

As soon as you begin homeschooling, it becomes cle