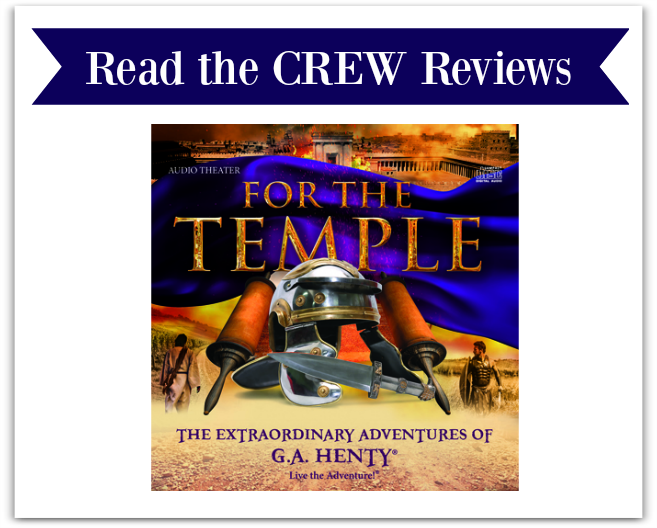 We are so excited to be reviewing Heirloom Audio Productions latest release: For The Temple by G. A. Henty.  Heirloom Productions are one of the Homeschool Review Crew’s favorite vendors and have been awarded numerous Blue Ribbon Awards in the Favorite Audiobook or Audio Drama category, for their amazing family-friendly historical audio drama’s. Some of our Crew received physical copies and some received digital copies of For The Temple. For the Temple takes place during the Roman occupation.

“The first duty of any Jew is to protect the Temple. I will fight that battle.” John, the son of a vintner living on the shores of The Sea of Galilee, wants nothing more than to live in peace and grow the finest grapes in Israel. Roman occupation has made that difficult, and the Zealots who oppose them have made it impossible. As the factions battle each other, the hand of Rome tightens its grip and John must decide who, and what he must fight for. On one of the darkest days in the history of Israel he will make a decision that could save the temple… or destroy it.

Our Crew received a study guide to For The Temple.  It has been designed for parents who want help talking their younger children through the storyline and its lessons.  It can also serve as series of written assignments for older students. The sets of questions begin and end as the narrative takes new turns, and each may cover from four to eight minutes of the audio drama. Each set of questions has three parts, Listening Well, Thinking Further, and Defining Words.

5 thoughts on “For The Temple Reviews”