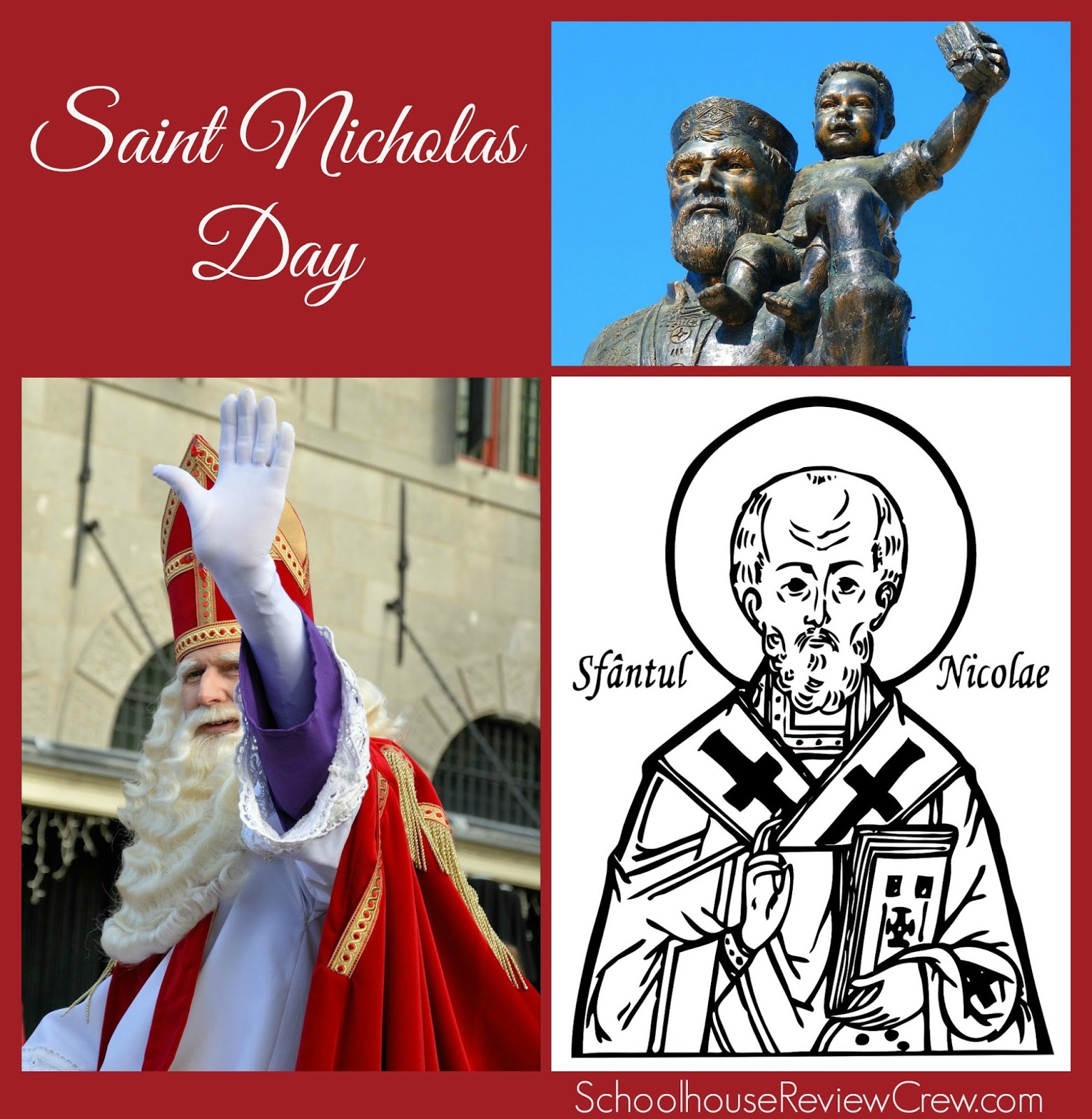 When we hear this little Christmas song, most of us picture the red-suited mall Santa, with a  a shy little tot seated on his knee. But as we all know, the popular image of Santa Claus has come a long way from its beginnings with the real St Nicholas. Whether your family really gets into the Santa-side of the holidays, or doesn’t “do” Santa at all, there’s opportunity for adding a little seasonal learning to your homeschool by looking at the history and customs associated with St Nicholas.

Since we didn’t focus on Santa when my kids were little, they weren’t interested in writing letters or visiting Santa at the mall or any of those things. But they really enjoyed the little bit of fun we had marking the feast day of St Nicholas. We did it very simply by letting the children leave their shoes by the fireplace on the night before – along with paper carrots for his horse – and in the morning they were delighted with the candy and small gifts that had been left for them. Then on Christmas morning, we didn’t worry about stockings for the kids, because that part had already been done! We all liked being able to spread out the Christmas celebration and gift-giving fun a bit more, and it took the spotlight off of Santa Claus on Christmas Eve and Christmas Day, allowing us to focus a bit more on the Nativity and on family.

Some years we spent some time reading stories about St Nicholas, coloring pictures or baking cookies; and a few times we enjoyed a one-day unit study about St. Nicholas. Sounds like fun, doesn’t it?

Here’s some info to get started with:

Well, it’s a long story and sometimes uncertain, but it includes Washington Irving’s satirical stories referencing a jolly Dutch character named St Nicholas in 1809, and a children’s book of 1821 that showed ‘Sante Claus’ arriving on Christmas Eve in a sleigh drawn by flying reindeer. These images influenced the poem, “A Visit from St. Nicholas” and were the basis for the drawings by Thomas Nast in 1863. By the end of the 1920s, many artists were portraying Santa in a red suit trimmed with fur, and this Americanized Santa became an advertising icon during the 1930s when artist Haddon Sundblom began portraying him in Coca-Cola ads.

The Feast Day of St. Nicholas is celebrated all around the world on December 6th. Children leave their shoes and wish lists for St Nicholas, and carrots and hay for his horse, and in the morning find small treats and gifts. In some places where St Nicholas is prominent, his day is the primary gift-giving day, and children will find their stockings filled with small gifts, nuts or fruit, and special Nicholas candies or cookies. In honor of the saint’s generosity, St Nicholas gifts are meant to be shared, not hoarded!

To find out more about St Nicholas, try some of the following resources:

A big thank you to Kym of Homeschool Coffee Break for writing this article.