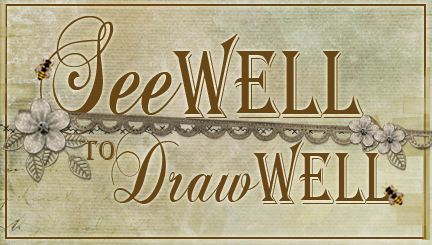 My first job in high school was doing odd jobs at a family-run assisted living place. One of my coworkers was Jay Fullmer, and he could draw anything. Seriously. Among other things he’s done, he had his work in the Birds in Art exhibit at the Leigh Yawkey Woodson Art Museum one year. His birds look like they’re ready to take flight off the canvas. In the quiet afternoons, he would sometimes work on this or that while he watched over the elderly residents.

I could barely draw stick figures; I was in awe.

One day, after I’d watched him work on a painting of songbird -I still remember vividly how the bird’s head was turned to the side, so you could see the beak and one eye- I asked him, “How’d you do that?!” –and he told me:

It’s simple: draw what you see. 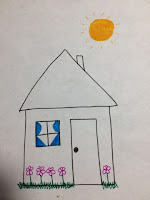 I must have looked a bit skeptical because he continued to explain: don’t think, “I’m going to draw a head,” or “Next I will draw an eye.” Look at the curve of the head, he told me, and see if it’s nearly circle or more oval shaped. Does it curve in on one side or the other? What angle does that curve make when it meets the bird’s bill? He said that we get these symbols in our minds, of what a bird or a person or a house looks like, but they’re really not like that at all — when was the last time you saw a house that was a perfect square, with a perfect triangle roof, one window (4 panes), and a door? I’ve drawn lots of “houses” that look like that, but I’ve never walked past one on the street, because it’s a symbol of a house, not an actual house that people live in. He told me that the way to get past the symbol is to learn to see, and to draw what I see every time, no matter how odd it looks at first. He said not to look at the bird’s eye, but to learn to see angles and lines and curves, and to pay attention to how they came together and interacted.

It was a 5-minute conversation that changed everything. Up to that day, I struggled to draw stick figures. I was not an artist – I would have told you that my sister got that gene, and I had other things.

But drawing is a skill of the eye, not the hand; if you can write your name you can learn to draw. The secret is learning to see well and having the courage to put it on paper even when your brain is screaming about how wrong it is.

I left him to his painting and went back to the area I was working that day. And sat down and drew a recognizable portrait. One of our residents was a grumpy old man who always sat in his armchair and read books. He did not like to be disturbed, and I was intimidated by him, so I sat where I could observe him without him noticing me, pulled out my notebook – just ordinary lined paper from school – and I drew him. Well enough that you could immediately tell who it was. I wish that I still had that drawing, but it has long since been lost. I still remember the excitement, though, of realizing that drawing is not a magical talent that some people have and others do not. Not long after, I drew this one – it’s the first drawing in my first sketchbook. I had worked hard, and I was beyond excited at how it turned out. 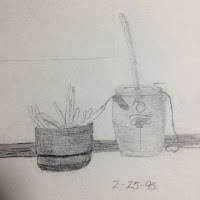 My friend brought me his copy of Drawing on the Right Side of the Brain, and then I found my own copy. Science may have distanced itself from the right-left brain idea, but the exercises in the book are excellent nonetheless. My son Hero(10) has now worked through part of the book -it’s literally falling to pieces- with good results as well.

Once you learn to see well, then all you need is practice. The more you practice, the better you see — and the better your drawings are. See well -good observation skills- is at the heart of scientific inquiry: you have to be able to make accurate observations in order to ask good questions or find reliable answers. Drawing, particularly drawing from nature, is a huge asset to scientific instruction at all levels. I’ve shared on my blog what it looks like when I’m trying to help my kids learn to see so they can enjoy drawing and learn to really see the richness of the myriad of details of creation. 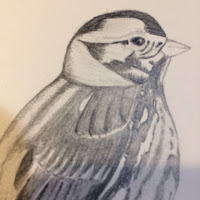 It’s been more than 22 years since that first conversation that opened up the world of drawing to me, I’ve been able to practice quite a bit. I’ve had other teachers, and all of them have had something important to add to the foundation that Jay gave me that day. I’ve even drawn (and painted!) a few birds of my own; this Fox Sparrow I recently drew represents a new personal best. It really is true: you need to see well to draw well. And learning to see -to observe things as they really are- is something that nearly everyone can do.

To develop a complete mind:
Study the science of art;
Study the art of science;
Learn how to see.
-Leonardo DaVinci

Ritsumei is a wife and a mother of three. She has been using a Classical/Charlotte Mason approach to homeschooling for 7 years since her oldest started doing preschool. You can find her blogging at , where she primarily posts about homeschooling life, educational philosophy, and the Bible.