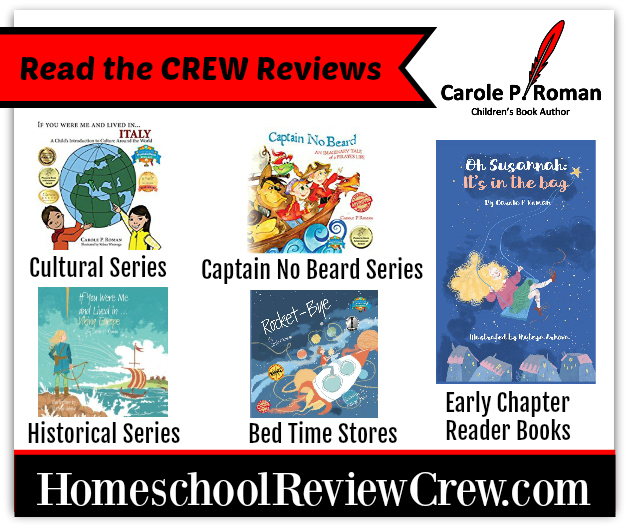 This article is in collaboration with Carole P Roman.

Imagine reading stories to your child that takes them on an educational adventure to far off times, far off places or just really great bedtime stories, each with beautiful illustrations. Members of the Homeschool Review Crew were given the opportunity to review four selections from several different books by author Carole P. Roman and take a mental trip with pirates, princesses, and explore different countries and periods of history with their children.

Carole P. Roman got her start in writing children’s books after a dare from one of her children. That dare led to her first book – “Captain No Beard – An Imaginary Tale of a Pirate’s Life”. Since then, Carole P. Roman has written many award winning children’s books. Both Captain No Beard-An Imaginary Tale of a Pirate’s Life and Captain No Beard and the Aurora Borealis have received the Kirkus Star of Exceptional Merit. The first book in the series was named to Kirkus Reviews Best 2012. Captain No Beard and the Aurora Borealis has been named to Kirkus Reviews Best of 2015. Roman is also the author of the award-winning non-fiction culture series If You Were Me and Lived in… that explores customs and cultures around the world, from Ancient times to today.

Each member of the Crew was generously given four selections to share with their family. These included choices from:

If You Were Me and Lived in… Cultural series If You Were Me and Lived in… Historical series Captain No Beard: An Imaginary Tale of a Pirate’s Life

Stuck in the Doldrums: A Lesson in Sharing

Strangers on the High Seas

The Treasure of Snake Island

Captain No Beard and the Aurora Borealis

Fribbet the Frog and the Tadpoles

A Flag for the Flying Dragon

Being a Captain is Hard Work Can a Princess Be a Firefighter?

I Want To Do Yoga Too

One to Ten: Squirrel’s Bad Day Oh Susannah: It’s in the Bag A big thank you to Brenda Prince of Counting Pinecones for writing this introductory article. 8 thoughts on “Oh Susannah, Bedtime Stories, Captain No Beard, If you were Me Reviews”