This article is in collaboration with Kregel Publications.

Earlier in the year, the Homeschool Crew had the opportunity to review Bertie’s War by Barbara Tifft Blakey from Kregel Publications. At that time, I shared that I am a fan of The Circle C Adventure series by Susan Marlow. So, I was so excited to hear that Kregel would be sharing Book 5 in this series – Andrea Carter and the Trouble with Treasure – with the Crew. 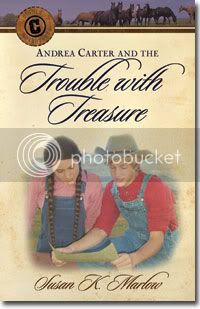 When innocent horseplay temporarily lands Andi and her friends in jail, they decide that a trip into the mountains will leave their troubles far behind. Accompanied by big brother Mitch and armed with a map showing old gold diggings, they can’t wait to strike it rich. What could be better than two weeks of camping and horseback riding?

But instead of gold they find heaps of trouble — trouble that leaves Mitch gravely wounded. Andi needs help fast. But who can she trust? And what good is a bag of gold when her beloved brother lies near death in the middle of nowhere?

Since my children and I have  been Andi Carter fans since the beginning, we have read the series in order. That’s not necessary, however, as each book works just fine as a stand-alone adventure. These books also make great read-alouds. It has been my personal experience, though, that once we start reading, the kids don’t want to stop.  This was especially true for Trouble with Treasure, which is filled with lots of cliff-hangers!  You just “have to read” the next chapter so you’re not left in suspense for too long.

Other books in the series include: The Long Ride Home, The Dangerous Decision, The Family Secret, and San Francisco Smugglers.  Book 6 in the series – Andrea Carter and the Price of Truth – is set to release in August 2010. (I’ve had a sneak peek at this book and, like the others in the series, it’s great!)

21 thoughts on “The Trouble with Treasure Reviews”