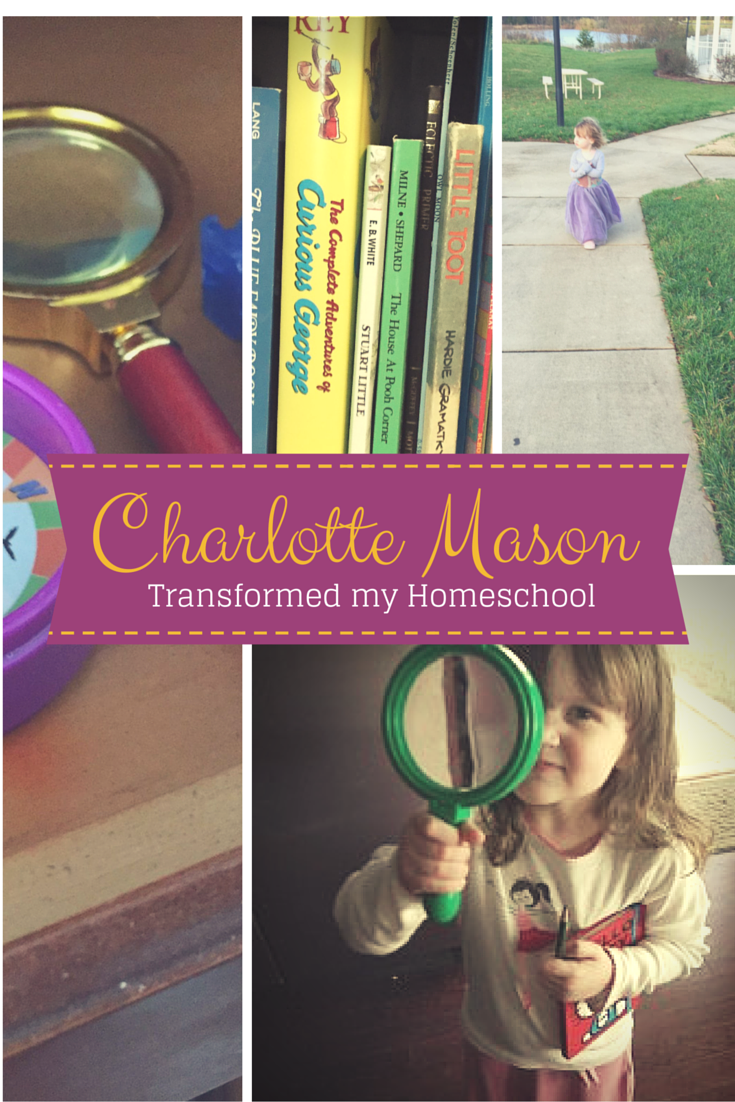 Six years ago I was a young mom who had unenrolled her upcoming kindergartner and second-grader from our local public school and set forth on this great adventure called homeschooling. It wasn’t a decision I had researched heavily and had an exact plan for.

We knew something needed to change for our oldest son who was having major problems adjusting to life in his first grade special ed classroom. As my husband and I consulted with some friends, they gave us some helpful advice on curriculum choices, and then off we went. I knew nothing about homeschooling philosophy or teaching styles. I didn’t realize that all curriculum is not created equal. I was familiar that some were secular and some had a Christian slant, but as far as educational philosophies I knew nothing.

So we trudged along our first few months recreating school in the home. In my mind, we needed to do so many hours of table time a day, we would check off our hours and days and make sure each section of curriculum got an equal share of time, with lunch at a certain point, and recess at another.

My kindergartner would fuss and beg not to do school. He begged me not to open up his language arts workbook. However, I insisted, believing that all kids hate doing schoolwork. I thought it must be my job to show him what needed to be done. I had essentially replicated what the public school was doing. Ironically, what my oldest son’s school was doing wasn’t working. It was failing him and so was I. And then came Charlotte Mason.

Charlotte Mason is an educational philosophy named after its founder who was a British Educator during the last half of the nineteenth and early part of the twentieth century. She changed the face of education in England and her principles began to heavily influence the way many people homeschooled beginning in the mid-1980s.

I remember it was at the end of our first year of homeschooling when I first discovered Charlotte Mason. I heard of a website called Simply Charlotte Mason and another called Ambleside Online and I quickly became enthralled.

Charlotte Mason believed in short lessons (approximately 5-15 minutes for elementary grades). She taught that formal grammar should be held off until age 10. Instead, kids would learn their language skills through oral narration (or as we call it “telling it back”), dictation (this is where the majority of grammar and spelling is taught), hands-on math lessons (no long pages of drudgery without the comprehension), handicrafts, nature study which replaces boring and dry science textbooks, artist, picture, and music study along with tons and tons of living books.

Suddenly, a whole new world had opened up to me.

So my two little guys and my tag-along three-year-old became busy but not with busy work. We began to stretch our legs and take nature walks every day – examining birds, bugs, tree leaves, and twigs.

Instead of drilling grammar and language arts, the older boys would do a small amount of copy work each day which helped them improve handwriting, spelling, and grammar with no formal lessons.

We worked with math manipulatives to understand math concepts and we listened to good classical music and looked through books full of paintings and drawings.

Every Friday we would gather our art supplies and paint in the style of what we were learning just for fun. We spent time enjoying the arts instead of purely studying them.

When it came time for reading, I would read from our stack of “living books” which allowed me to focus on spending time with my children and some good, well-written literature. If you are wondering what in the world living books are, don’t worry, it sounds scarier than it is. Living books are simply books written in a conversational style, rich with detail, which allows the story to come to life. This along with narration (which is when a child tells details they remember from the story without comprehension questions or prompting) would prove extremely important in the future after my son was diagnosed with dyslexia. Read alouds and living books have helped him probably more than anything else I’ve done.

I realized something through this homeschooling journey. Charlotte Mason isn’t a curriculum and it is more than just an educational philosophy. It is a way of teaching, a way of living, a way of being … as a family. Choosing to enjoy the big things and the little things and taking the time to breathe, and to be, and to realize that the best learning happens just like life happens … in the small steps that we walk every day. Sasha Mills is a homeschooling mom of 6 children. She blogs at Such a Time as This where she writes about her faith, large family, and homeschooling children with special needs including autism and dyslexia.

Homeschooling offers so many opportunities for fam

Dig deeper into your favorite books with Progeny P