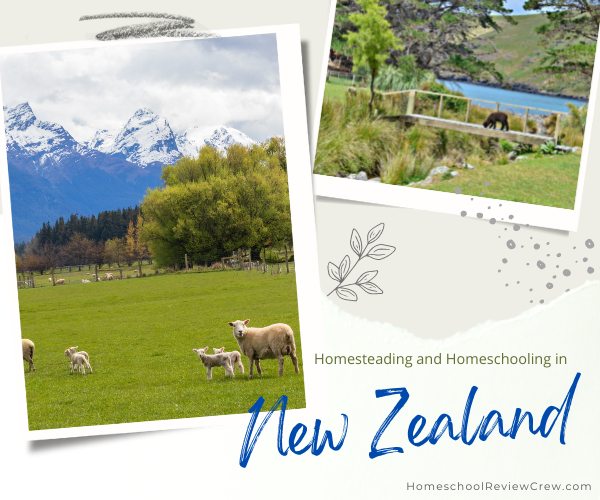 Homeschooling and homesteading in New Zealand are natural for us since they have been part of my life since I can remember. My parents left Los Angeles in the early 1970s, before I was born, and moved to Michigan to make a living off the land. They bought 30 acres and tried raising berries. When that failed, they ended up buying calves and raising them for milk cows. I grew up on a small dairy farm, and we always had a large vegetable garden. My parents had been hippies, and then about the time I was born, they met Jesus and their lives changed completely. Part of that change was the decision, when I was about five years old, to homeschool their children. At that time (around 1979), homeschooling was nearly unknown, and it was illegal in Michigan. My parents did it anyway, despite the lack of resources for homeschooling at the time. Mom taught all eight of us through high school, as well as keeping up with her garden and canning fruit during the summer.

When I got married, my husband and I bought a 40-acre farm in Michigan. Over the next 12 years, we built up a small business there, raising chickens and turkeys on grass and doing custom poultry butchering. We always had a large garden, and the last few years sold produce along with our meat at a farmer’s market. We also had a huge greenhouse and sold what we grew in that.

In 2009, we changed direction and moved to New Zealand with the six children we had at that time. We established a large vegetable garden at each place in which we lived (the third one now), and also bought a cow soon after we arrived in the country, for milk for the family. The cow also provides milk to raise lambs and calves for meat. We have also always had chickens, and for several years now, turkeys. For a while, we had ducks and geese as well, but when we moved the last time, we couldn’t bring them along, as we’re living in a small village.

For us, homesteading means raising as much of our own food as possible. My husband works a full-time job at a local sawmill, and three of the older boys have jobs (two full time, one part time at the moment), so most of the work here is done by me and the younger children. My husband and the older boys do the heavier jobs in the evenings or on weekends.

Right now, we own half an acre of land in the middle of a village of about 100 people. Our house and garage take up most of one half of our land; the other half, about a quarter acre, is all vegetable garden and a chicken run. We built a 10’x40′ greenhouse in the garden a couple of years ago. We also have the use of about 10 acres of land in a couple of different places—one across the road from us in the village, the other just outside and down the hill. We keep our cattle in those places. Currently, we have two milking cows, two steers for meat (one this year and one next), two heifer calves we’re raising, and a new bull calf. We don’t have enough grass for the winter, so we have to buy in hay, but it’s worth it to have our own dairy products!

Homesteading and homeschooling are so much a part of who we are that it’s a little hard to separate the two sometimes. We spend the mornings doing school work, and in the afternoons we go outside and do what needs to be done around the place. If something comes up that needs attention in the morning, the books get set aside. For example, one of the cows calved a few weeks ago. I didn’t think she was quite ready to have her calf, so we hadn’t put her in the safe paddock yet, and the calf fell down a steep cliff soon after birth. We spent a lot of time that morning searching for him (and found him unharmed!). We also organize our school year somewhat around gardening needs. In this country, the school year begins the first of February and goes until just before Christmas (December through February is our summer). February is one of the busiest months for gardening, so this year we didn’t start school until a week or two after everyone else. Then, I only started one subject our first week and added another subject a week until we were doing everything I had planned for the year. Also, we do not take the holidays throughout the year as most everyone else does. There are four terms here, with a two-week break in between each one. We work through that break so that we can finish our school year earlier, in time to get the garden planted in the spring. We also sometimes take days off during the school year if something needs to be done outside and we have a sunny day! We live in a very rainy area, so sunshine is often scarce.

Our children learn naturally about life cycles. They have seen how the cows come into season, are bred, have a calf, produce milk, etc. We even got to see one of our calves at the embryonic stage! The vet came out to pregnancy check a cow for us and showed us the ultrasound image of the calf. They also know how turkeys lay eggs and hatch their babies, and how the babies grow up and become food for our table. They know how to kill and clean poultry for the table.

One of my sons is studying farming for school this year. He struggles with academics but is very interested in farming, so I bought him a few books by Joel Salatin, Allan Savery, and one other person, and he is studying them. He is working to apply what he learns from these books to our situation here, both with the cows and with the garden.

All the children help with the chores. Early in the morning, some of them help with the milking, bringing the cows up from the paddock and then back down. We take a short break partway through the morning each day, and some of the children care for the chickens during that time. In the afternoon and evening, the cows and chickens are cared for again. In the spring and summer, most of the children spend time each day helping with the garden, either planting, weeding, or harvesting. They also help prepare vegetables for preserving. By helping with all these chores, they all learn a lot of life lessons—how to provide food for themselves and others!

Homesteading in New Zealand permeates our days, really. Before breakfast every day, we milk the cows. Breakfast includes homemade bread, homegrown eggs, and our own dairy products. A couple of times a week, I need to make cheese, so homeschooling happens around the cheese pot as I work on that. Many free-time activities have to do with homesteading, such as fixing up chicken pens or repairing things that are broken. Lunch and dinner often include homegrown meat, and almost always our homegrown vegetables. Conversations around the table often center around what is happening with the animals.

One week last year, I heard about the Home Grown Food Summit. We spent the week watching presentations about growing food, instead of our regular schoolwork! Each day that week, we chose the presentations we were most interested in, and all watched them together. We learned things from those presentations that we have been putting to use ever since in our garden, such as growing green beans on a trellis made of wire panels made into a tunnel. We also learned a lot about planting trees from one of the presentations, just before we were planning to plant several. This was one of the times I was thankful to be homeschooling: I could spend the time learning things I wanted to learn about homesteading and call it school time for the children!

Homesteading in New Zealand is not all work. We often get good laughs out of our animals and what they do. As I mentioned above, we have a new calf. We’re feeding him with a bottle, and my 17-year-old did the first few feedings. He held the calf between his legs so he could get the bottle into the calf’s mouth easily. After about three feedings, the calf came to him for the bottle—but the calf circled around behind and stuck his head between my son’s legs! He thought that must be the way to have a feed! Another thing we’ve chuckled at lately is the way one of the cats taught a cow to leave her alone. The cow was sniffing at the cat, and the cat swatted the cow’s nose around both sides of a post—the cow backed off and wouldn’t go near the cat again! Then there was the time we heard something on the roof of the house and couldn’t figure out what was making such a strange noise. It turned out to be a turkey sliding from the peak down into a valley of the roof, over and over again.

We also learn about death, by having animals. We raise a number of chicks and turkeys each year, and inevitably some die. We lost three out of four lambs last year, as well. It’s always sad, but a good opportunity to teach the children how to handle grief.

Do You Want to Homestead and Homeschool?

Special thanks to Emma @ Lots of Helpers for sharing about her family’s homesteading in New Zealand.