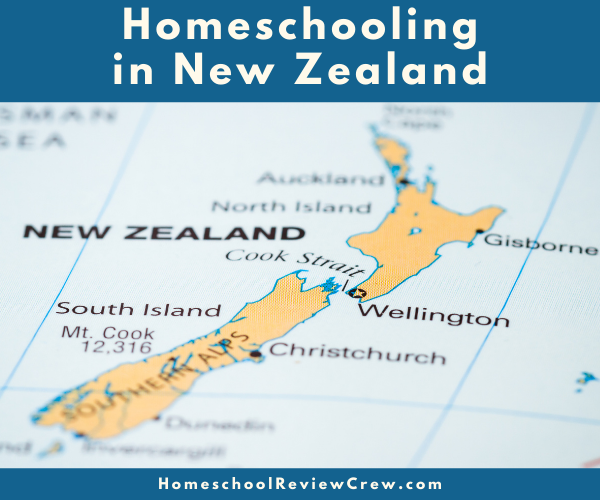 This week in our Homeschooling Around the World Series, we would like to travel far from British Columbia, Canada as we share a guest post from one of our Crew Members! Emma shares about her family’s life in New Zealand at Lots of Helpers where you can find reviews, her homeschooling journey, and more.

We have been homeschooling our children ever since our oldest started doing preschool books! That would have been about 18 or 19 years ago now. I never even considered sending my children to school. I was homeschooled all the way through. My parents decided, in 1979, when I was 5 years old, that they didn’t want their children to be in the public school system, so they never enrolled me in school. It was quite a leap of faith for them since at that time in Michigan, it was illegal to homeschool. Dad was even threatened with prison for keeping me at home. There was very little available in the way of materials for homeschoolers back then, and Mom ended up using Rod and Staff materials for 1st grade for me, then switching to Christian Light Education when that was first made available.

We have had nine children, and all were or are being homeschooled—even the current toddler! Our oldest basically quit doing schoolwork when she turned 16 and got the idea to start a book reviews website. She spent the next several years writing reviews and putting her website together, and still spends a lot of time on it; she’s currently rebuilding it from scratch. Our second and third were severely dyslexic, which threw me for a loop. I did eventually (as an answer to prayer!) find a curriculum to teach them to read. Our second child died at age 16. Our third quit school when he turned 16 (that is the legal age to leave school here in New Zealand), and started an apprenticeship as a mechanic. Four years later, he is nearly finished.

Our fourth child was quite academically oriented and learned to read simply from listening to me trying to teach his older brothers! He enjoyed school, and kept working at it until a few months after he turned 17; now he is doing a floor-laying apprenticeship. Our fifth is now 15. Schoolwork is difficult for him, but he keeps plugging away at it. He also works part-time for a builder. Then, we have an 11-year-old, a 9-year-old, and a 6-year-old who are doing school. Our youngest, who is nearly 2, wants to do school; she draws a lot of pictures and reads books, and sits on the others’ books while they are trying to work!

Our oldest was 11 when we moved to New Zealand, so we started out homeschooling in Michigan for several years. When we came here, we had to get exemptions for all the children six and older as soon as we got our work visa. Since then, whenever a child turns six, I write an exemption for him or her. In that application, we need to state our philosophy of education and what we plan to teach that child for the first year.

They want details of every subject, and how I plan to keep records, as well as what resources we have on hand. They also want to know what our long-term goals are for the child, and they want to see a detailed topic plan—how I will teach and assess a particular study. Then, I have to give details of a typical day and week in our homeschool. Once I have written this exemption, I send it off—and then wait for the Ministry of Education to come back with questions! When the questions are answered to their satisfaction, they grant the exemption, and my child can legally stay home for school. We are paid a small allowance twice a year, after sending back a declaration that states that each child has been/has not been and will be/will not be homeschooled. You can find more information at https://www.nchenz.org.nz/exemption-application/

There are no requirements for our curriculum. We can choose whatever we want to use for our family. Of course, there is a huge range in family philosophy! Some families push academics very hard, with the goal of going to University. Some are unschoolers. We fall somewhere in between, with our goal being for our children to be productive members of society.

Most regions of New Zealand have support groups of some sort. When we lived in Canterbury, we were part of a writing group called (yes, really!) Dead Boring. We met every two weeks during school terms for the children to share something they had written, and spend time socializing. Three years ago, we moved to the West Coast, and there really weren’t any groups doing anything here. Since then, a friend and I have started a group similar to Dead Boring. I can’t speak for other areas, as this is all I have had experience with, but I have heard of groups in other areas. A good way to find local groups is to ask questions on this Facebook group.

People in New Zealand choose to homeschool their children for quite a variety of reasons. We, and most of our friends, do so for religious reasons. We don’t want our children indoctrinated by the state schools. Some people believe their children will get a better education at home, and a growing number choose to do so because of bullying. One reason I’ve seen a lot of times lately on the Facebook group is anxiety in the children. After the lockdown last year, the number of new homeschoolers skyrocketed—a lot of parents found out that their children weren’t handling being at school as well as they thought they were.

Nature study is very easy to do here! Especially on the South Island, where we live, the population is so sparse that nature is everywhere. It is very easy to go from one landform to another. The mountains meet the sea in many places. When we lived in Canterbury we often went to the beach and studied life there. Over here, the beaches aren’t as interesting, since we don’t have rock pools, but there are a lot of rivers. By going back and forth across the island to visit friends, we pass through many biomes and major climate differences. When I read a history book to the children last year that spent a little time talking about mountains and their influence on climate, and therefore on human culture, we could really understand it, because we live it!

New Zealand is a very homeschool-friendly country at the moment. It is relatively easy to get an exemption, and after that, no questions are asked. Most people that learn that we homeschool are supportive, and I’ve talked to a number of moms who wish they could do it, too.

1 thought on “Homeschooling in New Zealand”