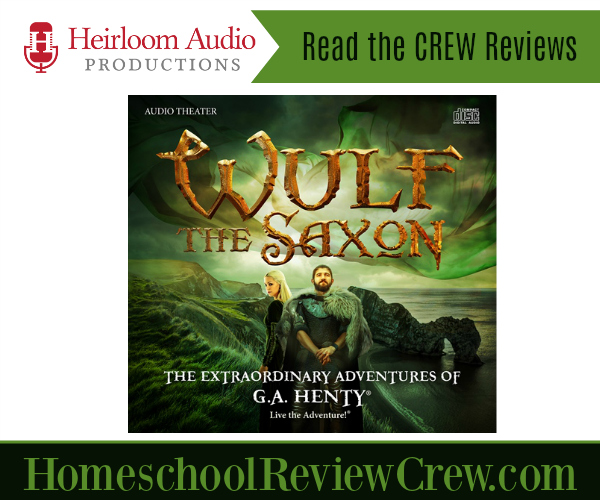 Sail back in time to England of the 1060’s where King Edward the Confessor rules a country that seems to be constantly at war, either from across the sea, or from within. This is the setting of the story of Wulf the Saxon, the newest release from Heirloom Audio Productions’ hit series The Extraordinary Adventures of G.A. Henty. Wulf is a young Saxon page serving under Earl Harold Godwinson, in hopes of one day becoming a Thane and ruling his family’s lands. Wulf must learn how to behave in a manner worthy of his position. This includes learning how his behavior, or misbehavior, reflects upon Earl Harold, and in turn, the King. This audio drama tells a tale of loyalty, daring, and courage as it follows Wulf from the young age of 16 through the Battle of Hastings in 1066.

Families from the Homeschool Review Crew recently had the opportunity to review the Wulf the Saxon Single Pack which includes over 2.5 hours of audio adventure designed for ages 6-16 on 2 CD’s. The storyline is an adaptation of G.A. Henty’s famous book Wulf the Saxon. The engaging characters hold the attention of young and old alike as they teach about this time in England’s history and point the listeners to the Biblical values and eternal truths that Wulf and his friends learn along the way. During a time when most marriages between nobles were made to further alliances and/or prevent wars, Wulf learns the truth behind Earl Harold’s words that “Fortunate are the few who marry for love.”

Wulf the Saxon is the ninth release from Heirloom Audio Productions and is sure to become another family favorite as the superb acting and quality sound effects are accompanied by another masterful original score by Emmy Award winning composer John Campbell. Characters in this tale are voiced by such well known actors and actresses as Brian Blessed, Jack Farthing, Helen George, Patrick Godfrey, Chris Larkin, and Sian Phillips. The other characters are voiced just as well, even if the names behind them are lesser-known.

This title should take its place on your family’s shelf alongside the previous Heirloom Audio Productions releases which include:

A big Thank You to Carol of Home Sweet Life for writing this introductory post. 10 thoughts on “Wulf the Saxon Reviews”