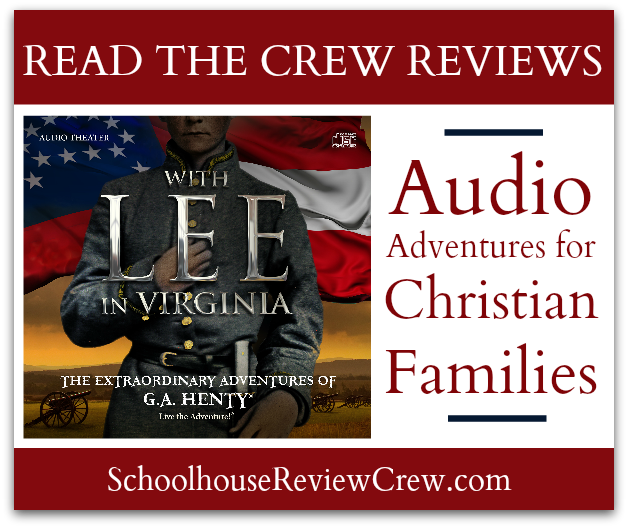 This article is in collaboration with Heirloom Audio Productions

Heirloom Audio Productions just released its third dramatization based on a novel by George Alfred Henty, from the series known as The Extraordinary Adventures of G.A. Henty. If you are ready to immerse your students in a Civil War era, grab ahold of this exciting new audio drama —With Lee in Virginia.

Heirloom Audio Productions sent a copy of With Lee in Virginia to several members of our Crew. The reviewers also received some extra resources, including a study guide and a soundtrack, both digital downloads.

Selections from The Extraordinary Adventures of G.A. Henty have previously been chosen for the TOS Review Crew Blue Ribbon Award — Under Drake’s Flag and In Freedom’s Cause were both previously reviewed. Using stories with a strong focus on Christian themes with a focus on character (and especially the concept of slavery) this audio theater experience allows listeners to adventure with two teen boys in a coming of age Civil War dramatization.

With Lee in Virginia is a durable two-CD set with two and one-half hours of “non-stop adventure” for ages 6-adult.

Stories of virtue and valor, daring and determination, character and courage. From history’s master of storytelling . . .

The audio dramatization was written by Robert Liparulo and the soundtrack by Emmy-winning composer John Campbell (of Narnia). Actors include notable characters such as Jim Weiss, Sean Astin, Kirk Cameron, and Chris Anthony. A big thank you to Margaret Chind of Creative Madness Mama for writing this introductory post.

4 thoughts on “With Lee in Virginia Audio Drama Review”