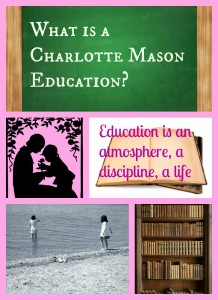 When I began homeschooling I began with the idea that we were doing school at home. I followed a very traditional, structured school schedule. I had taught in a Christian school, and I used the same methods and curriculum that we had used in the school. I quickly realized, however, that this was not working with my kids. They were getting stressed out by the rigid structure and routine. And I wasn’t enjoying our homeschooling either. And then a friend came along and introduced me to Charlotte Mason and her methods.

Who was Charlotte Mason?

Charlotte Mason was a British educator who lived in the 1800/1900s. She was orphaned early in her life but was able to go on and earn her teacher’s certificate and teach in England’s public schools. At the time, there was a great divide between how the poor were educated-for a trade- and how the rich were educated- in the liberal arts. Charlotte wanted to see a time when all children were offered a “liberal education”- a broad education with exposure to many different things. Charlotte eventually began teaching at a teacher’s college, and her experience there led her to realize that parents could benefit from education about child training. She gave a series of lectures that were eventually published into Home Education- a six volume series of books with Charlotte’s methods and principles. She later opened the House of Education, a training center for governesses and those who were training and caring for young children. By the end of the 1800s schools that used Charlotte Mason’s methods were springing up, and the training center, located in Ambleside, continued to be a well known teacher’s training school.

What is Charlotte Mason’s philosophy?

Her philosophy is often summed up in her quote- “Education is an atmosphere, a discipline a life.” This meant that education was focused in these three main areas:

Atmosphere– the home environment that surrounds the child

Discipline-the habits that the parents instill in children

What are Charlotte Mason’s common methods?

1. Give the child real, “living” literature, not just “twaddle.” In other words children need to be fed ideas from literature that makes the subject come alive from them. Seldom are textbooks used because they are often dry and uninteresting.

2.Handwriting and spelling words come from real passages from real living books instead of just word lists and busy work. Children often copy passages from good literature to practice handwriting. And they learn spelling by writing passages that a teacher dictates from a living book.

3. Use narration to help children comprehend what they are hearing and reading. Narration involves the teacher/parent or the child reading a passage and then retelling the passage in their own words. Narrating involves a higher level of comprehension that just basic questions about the reading.

4. Introduce great artists and musicians to children so that they can experience the beauty of their works and learn from them. Picture study is allowing the child to look at a work of art and then discuss it and reproduce it in the same way that narration reproduces a written passage.

5. Provide plenty of time for the child to be outdoors. Charlotte didn’t suggest any formal science. Instead she encouraged “nature study” where the child is allowed freedom to explore outdoors and learn from what he sees.

6. Allow plenty of time for the child to have much exposure to a great variety of things– Shakespeare, hand crafts, maths, and foreign languages.

7. In all things that the child does, encourage the habit of attention. Charlotte spends much time in her books talking about the development of habits which she calls “laying down the rails.” Her methods use short lessons while teaching so that the student can learn to be wholly attentive during the work.

Where can you learn more about Charlotte Mason?

Ambleside Online has a complete set of Charlotte Mason’s six volumes online for reading. I read through the original works and learned so much about parenting and teaching.

Learning about Charlotte Mason’s methods and the principles that she believed in has helped me to be a better and more focused teacher and parent. Many of her methods have worked beautifully for us. We love great literature in our home. And my kids have had the opportunity to experience Shakespeare and great artists and great composers. I’ve learned so much also as I’ve followed the trails down which a Charlotte Mason education has led us.

Leah Courtney is a homeschooling mom of four. She was a school teacher in her former life and now loves homeschooling her children. Recently she began the adventure of homeschooling a high schooler. She loves reading and reviewing and blogging about life and homeschooling. You can visit her at As We Walk Along the Road.