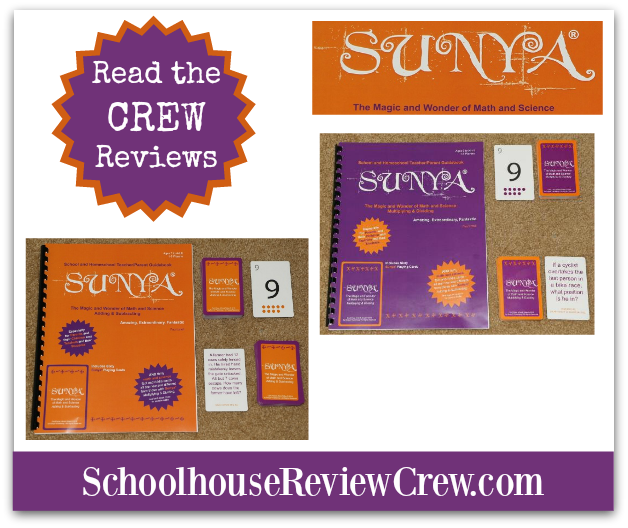 This article is in collaboration with Sunya Publishing.

It is always more fun to learn using games. When you can find a game that your child enjoys playing, you can teach new concepts and reinforce concepts with ease. The Crew recently had the opportunity to try out two brand new math and science games from Sunya Publishing.

There are two types of Sunya games. Both games are card games and are played similarly.

Sunya- The Magic and Wonder of Math and Science Adding and Subtracting is a game meant for ages 7 and up. Players will make addition and subtraction facts using cards in their hands and in play. Younger players could play as teams with older family members as they are learning facts.

Sunya- The Magic and Wonder of Math and Science Multiplying and Dividing is a game meant for ages 9 and up. Players will make multiplication and division facts using cards in their hands and in play. Again, playing as teams could help younger players learn the facts.

The word “sunya” is a Sanskrit (from India) word for “empty.” Both Sunya card games have the object of being the first player to use up all of the cards in the hand.

A bonus learning element in each Sunya game is that the winner of the round gets to ask the other players a question. Math and science riddle and question cards are included for this purpose.

A game book comes with the card sets. Each Sunya game- adding and subtracting or multiplying and dividing- has it’s own game book. The game book contains an explanation of the origin of the game as well as detailed instructions about gameplay. The book also gives alternate ways to play the game for teams, for younger family members, for a longer game, and more.

The whole family can practice math facts as well as learn interesting math and science facts with Sunya.

A big thank you to Leah of As We Walk Along the Road for writing this introductory article.