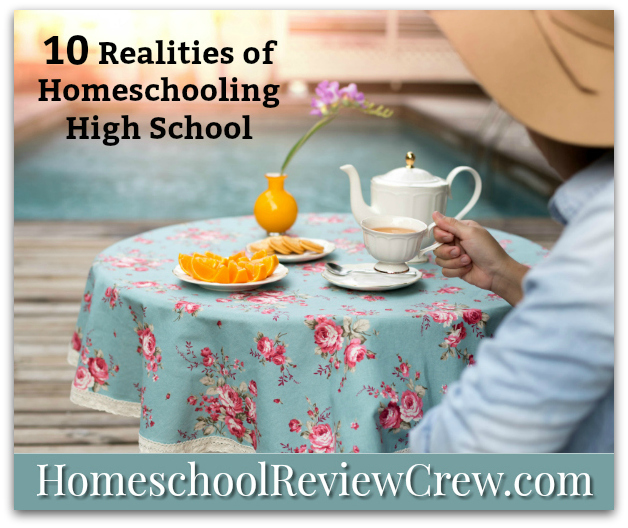 While immersed in the world of homeschooling preschoolers and kindergarteners, it’s hard to imagine (because you have to go through it to accept it as reality) that kids really do grow up eventually. It’s true! At some point between when your kids stop taking daily naps and you start the habit, you become the homeschooler of an older child, a high schooler even, and that’s a different sort of life. It can even be a lonely sort of life some days.

I know there are some of you simultaneously nursing a baby, rocking a toddler, reading a book to a preschooler, and saying “sound it out” to a second grader for the 752nd time in an hour. I have eight kids—I get it. So some of you think that lonely sort of life sounds almost…appealing! You’re thinking it’s like a weekend alone in a hotel with room service. Here are ten realities homeschool parents of younger children don’t understand about the loneliness that comes with homeschooling older kids.

First of all, the slew of doubt and prophetic disaster which relatives and random strangers hurled at you when you began homeschooling preschool (which I call raising kids) is multiplied about a thousand-fold when your kids reach high school. Regardless of the success and character your children have (hopefully) proven by this point, people often still think it’s a silly game. They think that when the stakes are high (as in high school, with college scholarship opportunities looming) you’ll stop playing school and do the right thing—send your kids to a “real” school. It’s even worse if your kids aren’t on the college track. If you want to face a world of incredulity and scoffers, homeschool your kids through high school. Bam—you’re a target!

Second, there comes a point when your children begin learning what they want or need to learn for their specific gifts and life paths. Once your kids are in high school (or, as in our case, years before), you step from teacher to guide. You buy the books or help hunt down the internships or proofread the scholarship application or drop your child off for a CLEP test, but as far as sitting down and sharing lightbulb moments or teaching your children what you loved—not so much. And eventually, the child asks for the keys and drives herself to the CLEP test and buys her own books. What do you do? Take her out for celebratory ice cream.

Third, nobody cares. Lots of people want to see (or at least tolerate) social media pictures of your cute little five-year-old on her first day of school in that darling dress Grandma sewed for her. Nobody really cares about your 16-year-old’s 2160th day of school in her favorite ragged snuggly sweater she rescued from a free box at a thrift store. Unless your child is exceptionally exceptional at something (music, art, science, whatever) and excels beyond 99% of the rest of the world her age, sadly, nobody cares anymore. So long Facebook likes! That world is long gone. Fourth, you become a dummy. Say what?! Yes, there comes a day when your kids start telling you about [insert complex topic here], and all you can do is stare. You don’t even know what language they’re speaking! That’s partly because sometimes they’re not even speaking English. Your children should and will exceed you in their areas of interest and talents, unless, of course, that area is shared, in which case, things get really fun and not-so-lonely.

Fifth, field trips are…different. A field trip could be a trip to a college or a work place. It could be a meeting with a potential employer. It could be any number of things that may or may not include you. What it’s not is a trip to the US Post Office, the fire station, the grocery store, or the petting zoo. Parents don’t even usually sit in on teen events at the local library. Whaaaa!

Sixth, older kids are expensive. College textbooks cost more than phonics workbooks. While you can teach a whole lot of good stuff using a library card and a magnifying glass in the earlier years, colleges won’t accept “I walked the Pacific Crest Trail for six months” for science and phy ed credit. I would, but colleges—no. Go figure. So you and/or your older child are out earning more money instead of trailing ants across the lawn.

Seventh, you’re older, and for some reason, many younger moms of younger kids often don’t want to “hang out” with older moms of any age kids. They want to talk about pacifiers and hours of sleep and assume you don’t get that world. They don’t want to hear that your teenager slept for 16 hours on Saturday, although, ironically, they often want to tell you that their baby slept for 14 hours on Sunday. They want your advice on curriculum, but not parenting, so many times you become a part-time, tongue-biting guide instead of a friend, even though you know how to break their child’s annoying interrupting habit. I know—it doesn’t make sense to me either.

Eighth, you aren’t always the teacher. The days of learning math in the produce section of the grocery store are gone. Unless you have a strong skill in a certain area, you will have to find replacements for yourself. Don’t cry. This can be a good thing. Often (as in our home) that replacement is the child himself, as he uses self-teaching books. (Here’s what we did.) Other times it’s a co-op teacher if you can still find them at your child’s level—another challenge.

You may choose the local high school, but then you have the issue of thrusting your prodigy into the world you intentionally removed them from. You could bump them up to college classes, but that world is even less filtered and may not be appropriate for your 14- or 16-year-old. Not to mention the cost! There are online classes, but has your child’s level of discernment prepared him for what he will meet outside your sphere? If you’re homeschooling a six-year-old, consider these things now, so your child’s character and faith are prepared for what is inevitably coming, because your brain will explode. It will. Boom.

Ninth, most students get busy. The intensity of their life paths inevitably limits the wonderful free time and family time that many of us homeschool families cherish. They become slaves to a college schedule or something else foreign to your family over the previous years. Finally, number ten: a successful parent launches a child. That means that child is prepared for marriage, the working world, taking over major tasks at home, entrepreneurship, college, or something similar. By definition of growing up, those “children” are prepared for a life beyond childhood. While this can be quite exciting and fun for the parent and young adult alike, it is also saying goodbye forever to those precious childhood years. Does that choke you up a little bit? Yeah, me too. Major sobs.

It’s a lonely road at times, as the child you successfully raised walks into her future both figuratively and literally. You’re left with your own fears, your guilt for the areas of weakness you still see in her, your hopes for the future, and the immense, incomparable joy you feel at the blessing which that young adult, that friend has become in your life. What?! A new friend? Yes! As you step from strictly parent to guide, you gradually add “friend” to the title, which makes that road considerably less lonely. In fact, it makes the whole journey worth it.

That said, if you see a homeschool mom wiping away a few tears as she waits for her youngest child to finish a college exam, sit down by her, offer her some chocolate, and ask how to get your four-year-old to stop interrupting. She’d appreciate the company.

Christy Bagasao shares her family’s full-time RV and music mission adventures at TheTravelBags.com and blogs about simple living at TheSimpleHomemaker.com.

3 thoughts on “The Lonely Path of Homeschooling Older Children”

Has your summer break or ‘end’ of school been