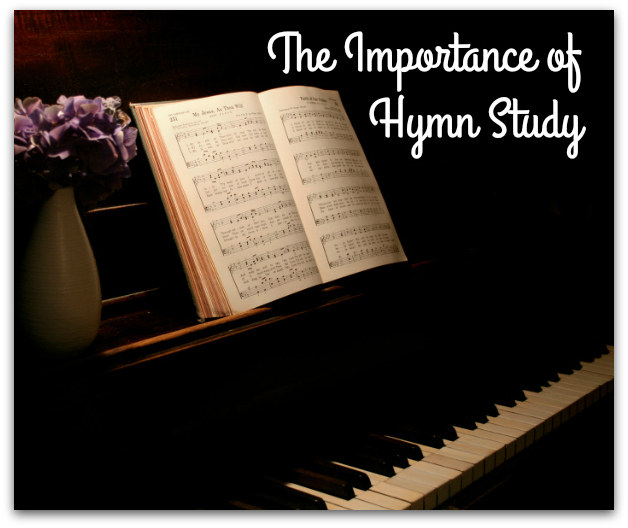 Do you take the time to study the worship songs that you sing?  To ponder through the people of faith who wrote and to understand why they wrote the songs they did? If you don’t, I urge you to consider doing so.   Today I will talk about why you should, explaining the importance of hymn study…

Seeing the faith of the past

Studying the men and women who wrote hymns of faith has deepened my appreciation for my spiritual heritage. It’s good to read about people who make simple, yet profound statements, and have those words immortalized in music to help us see their import.  One such song is Trust and Obey.

Understanding the need for songs of worship.

When the reformation first happened, common people needed to learn the doctrines, the standards that they believed.  Putting words to music has long been known as an aid in memory. So hymn writers helped the mass of new believers better understand their faith.

Men like Isaac Watts, Charles Wesley and others.   Consider well Elvina Hall inspired by her pastor’s preaching that she wrote a hymn about how Jesus Paid it All.

When I looked at the simple song of “I have decided to follow to Jesus” I was stunned to learn that this song was based on real life.  A man lost his family because he refused to recant his love for the Lord.   The steadfastness of that man’s faith has influenced believers for years. A simple fire-side song brings that man’s faith into stark reality, showing us what we give up for the Lord.   This faith in action matters, and gives us new heroes of faith to look to.

At one point in my life the organist of the church I was attending asked if I would be willing to help her children learn the songs of faith.  We had a delightful half-hour every Sunday after church picking a song and going through the hymns.  We talked about what the words meant and then learned to sing them.  Their mom was a good pianist which made it rather fun.  A side benefit was the increased vocabulary the girls gained.  My lad and I learned Rock of Ages a fair bit back and he still knows the words and loves belting them out in church.  It’s a good thing you know?

I urge you to take the time, learn the songs of faith. Look into the lives to the people writing them and give yourself, and your children, additional heroes of faith.

Thank you to Annette V from A Net in Time for sharing this post.

1 thought on “The Importance of Hymn Study”