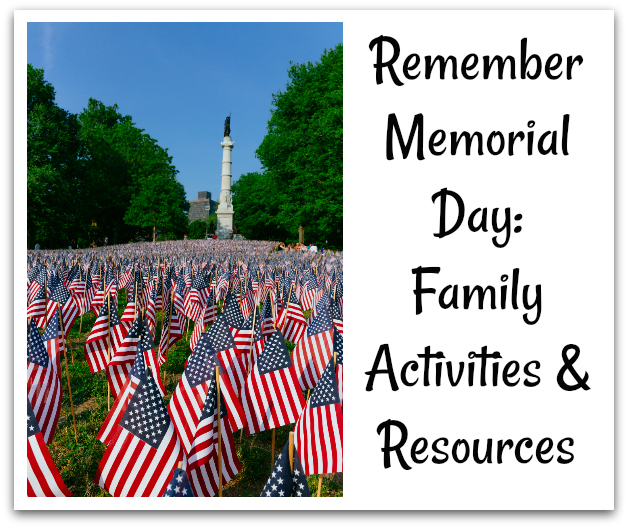 What does the last Monday in May mean to your family? However you choose to usher it in, here’s an offering of ways to remember Memorial Day with history, activities and other resources.

According to a report by ngl.org, “only 28% of Americans understood the true meaning of Memorial Day. It’s important that we do not forget the sacrifices of our military service members. We must pause to honor, reflect and remember the precious lives lost while fighting the war.”

One way we can do that is by sharing a few highlights about the history of Memorial Day.

Memorial Day, observed on the last Monday of May each year, pays special tribute to those who died while serving in America’s Armed Forces.

The origin of Memorial Day, originally called Decoration Day, is greatly disputed. It’s reported that over twenty cities claim to have birthed the first Memorial Day. It’s no wonder many of these occurred during a time when our nation was still divided by the Civil War.

One day in October 1864, three friends: Emma Hunter, Sophie Keller, and Elizabeth Myers went to a cemetery in Boalsburg, Pennsylvania. They placed flowers and wreaths on the grave sites of two Union soldiers who had died while serving in the Civil War. The women resolved to return to the cemetery and decorate all the graves on July 4th the following year. A yearly celebration of this event has taken place in Boalsburg ever since.

In 1865, several cities in Mississippi and Virginia decorated the graves of fallen soldiers. However, most people chose only to decorate the graves of those who fought for “their side.”

Eventually in 1867, the village of Waterloo in New York was donned with official bragging rights as the “birthplace of Memorial Day.” Most likely because they were the first recorded to close businesses, fly flags at half-staff, and hold special grave-decorating ceremonies—although only for those of Union soldiers.

A Day to Unite People

One key event in April 1866 aided in the healing of our divided nation. Four women in Mississippi put flowers on the graves of both the Confederate and the Union soldiers. Some folks did not approve that both sides were honored, but many people were touched by their act of kindness.

One person influenced by the women was the writer, Francis Miles Finch. After reading a story about their impartial gesture, he was inspired to write the poem, “The Blue and the Grey.”

Memorial Day is often credited to General John A. Logan. While there is much debate about who influenced Logan’s decision, it was he who issued General Orders No. 11 designating May 30, 1868 as a day of decorating the graves of Union soldiers. Therefore, that date became the first, official Memorial Day.

Even though it’s believed over fifteen states placed flowers and flags on graves that day, the first formal observance is recorded as happening at Arlington National Cemetery with Congressman James Garfield speaking.

It wasn’t until after WWI when Memorial Day became a day to remember and honor all veterans who died while serving in the Armed Forces.

President Lyndon Johnson declared Memorial Day a federal holiday in June 1968 but it did not take effect until 1971 when President Richard Nixon was in office.

An estimated 40 million Americans travel fifty miles or more on Memorial Day weekend. Some people use the long weekend to kick off the summer vacation season. Others gather friends and family for cookouts and open their swimming pools.

Churches across the nation utilize the month of May to hold special memorial services and fellowship over covered dish dinners.

Nothing is wrong with any of these things. In fact, those who serve in our military cherish these things as well, perhaps even more than civilians.

But it’s important to share with our families why we must remember those who died while serving our country. They served our country to protect our freedom, our way of life, all those things we enjoy on Memorial Day and the other 364 days of the year. Perhaps your children can list the freedoms they enjoy.

In 2000, President William Clinton signed into law “The National Moment of Remembrance Act.” On Memorial Day, 3:00 p.m. has been designated as a time to pause silently for one minute to remember and honor those who died while serving our country.

“It’s a way we can all help put the memorial back in Memorial Day.”

Other family activities you may choose to do:

Here is a list of additional resources you may want to incorporate into your studies about Memorial Day.

At AmericanVeteransCenter.org. you can learn more about American veterans who recently died while serving our country.

In addition to gathering your family on Memorial Day for a moment of silence, consider praying for the families of our fallen heroes.

A big thank you to Sally Matheny of SallyMatheny.com (Tell the Next Generation) for writing this article.

Homeschooling since 2000, Sally Matheny is an encourager, writer, and speaker. She encourages people to live victorious and to courageously tell the next generation wondrous things. She and her husband live in N.C. and have three children, two sons-in-law, and one grandchild.

Kratz, J. (2018). The Nation’s Sacrifice: The Origins and Evolution of Memorial Day.