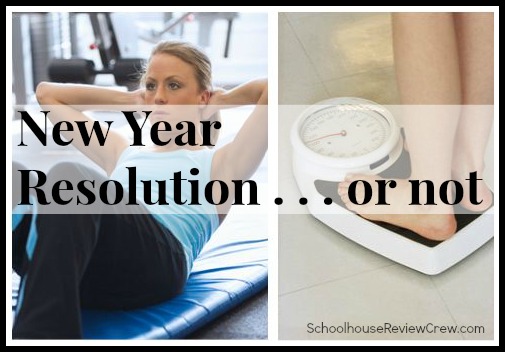 New Year Resolutions tend to be things we have “high hopes” for but are not necessarily ready to put the “umph” behind to make them happen. If they were, we would have already started them!

But the main reason I no longer “do New Year Resolutions” is because I have given my life over to Christ – He is the One who is in control of my life. Therefore He will be the One to decide what will or will not be accomplished in my life in any given year. I don’t have to “build up the strength or courage” to “do the right thing”. I simply look to Him to help guide me in the right direction.

Before I got saved, life was much more “guess work” and much less trusting and faith. I just kind of tossed a quarter to see if it was heads or tails. Now, I wait and walk where He would have me go. When I do that, I don’t have to try to come up with the strength or the courage because I know He is there with me.

The first and probably most common New Year Resolution that comes to mind is weight-loss and/or getting in to better shape. Do we ever wonder WHY that is? Could it be that we are hounded continually about this as the year draws to an end? Those who sell such products KNOW we are all feeling guilty for eating like crazy from Thanksgiving to New Year’s. The bad thing is…we fall for it every year! How about stopping and looking to the Lord for guidance? And how about BEFORE Thanksgiving, Christmas and New Year’s? I do believe if eating less and exercising more were things of serious interest, we would start them way before all the ads at the end of the year begin haunting us! (Which is actually something I did this year…I started Weight Watchers a few weeks ago – in prep for the holidays. Lord willing, no weight gain [or at least very little] for me over the holidays this year!) Now, the one thing I *DO* like about New Year Resolutions is that they get us thinking about the things we SHOULD be doing…losing weight, exercising more, spending more time with our families, spending less time watching TV or playing video games…things like that.

But what I would like to suggest is that you look at these things at a time when it wouldn’t be considered a New Year Resolution and maybe start them before the current year ends. But…don’t just decide to “jump at the chance” to change. Put serious thought in to it. Have a “plan of action” then follow through with that plan. One thing I have learned from Weight Watchers over the last few weeks is preparation. They have been preparing us the last several weeks for THE DAY…THE DAY OF EATING (oh, I mean Thanksgiving). Seriously, they have been talking to us about emotions, and mentally seeing where we would be and what would be on our plate and finally what our plan of action was – what was at least ONE thing we were going to do different than last year. And for me, it worked! And it felt REALLY good! (Some thing I don’t often associate with New Year Resolutions. *grin*)

Regardless of whether you do New Year Resolutions, or not, I pray you will have a wonderfully blessed beginning of 2014!

Have a wonderfully blessed day!

Dawn is a woman of God who is married to the love of her life. She works part-time, homeschools their two boys (since 2008) and loves animals. She enjoys learning what the Lord will provide for each day.