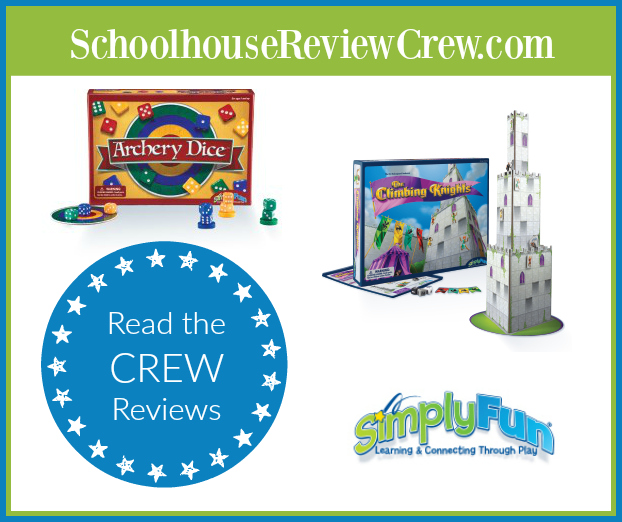 This article is in collaboration with SimplyFun.

SimplyFun is a unique company that produces quality games that families can play, learning as they have fun. The products that they produce are meant to be educational, while at the same time engaging parents and children and giving them opportunities to interact with each other. Games from SimplyFun are unique in their style and game play.

For each game that is offered in the SimplyFun line, there are target educational areas given. Games might strengthen eye hand coordination or thinking skills or give opportunities for children to use strategy as they play the games.

In the product description of many of the games on the website, you can find information about academic standards addressed in the game, skills that you can work on while playing the game with your child, and information about adapting game play for children with special needs or Autism. For this review the Crew had the opportunity to check out two great board games from the SimplyFun family of games. In this game players stack dice and aim them at an archery target. During a round, players can hit the target, knock over opponent’s dice, or claim an opponent’s target. The goal of the game is to be the first player to acquire four targets.

The game is played with 2-4 players.  Players aged 7 and up will enjoy this game, and game play will take an average of 15 minutes. Included in the game box are archery targets, dice for each player, and wooden disks. Rules are included to explain the specifics of game play.

Archery Dice involves strategy as players consider what move to make and improves eye hand coordination as players aim and shoot their dice. The object of this game is to be the king’s best climber, scaling the castle wall to claim two coats of arms. Players move their climber up the walls of a castle that is guarded by two guards, one on each level of the castle. They also take turns moving the guards on each play.

The Climbing Knights is played with 2-4 players and is intended for players aged 8 and up. The game  play will take an average of 30 minutes. In the game box you’ll find a magnetized cardboard castle that will be easily assembled at each play, four magnetic knights that can stick to the castle face, two guard pieces, and magnetic coats of arms pieces.

This game involves spatial reasoning as players follow the rules about how to successfully move knights past the guards. There is also strategy involved as players consider how to best move their pieces while also trying to move the guards to “catch” their opponents piece.

Connect with SimplyFun through social media.

A big thank you to Leah of As We Walk Along the Road for writing this introductory article. 2 thoughts on “Medieval Games For the Family Review”