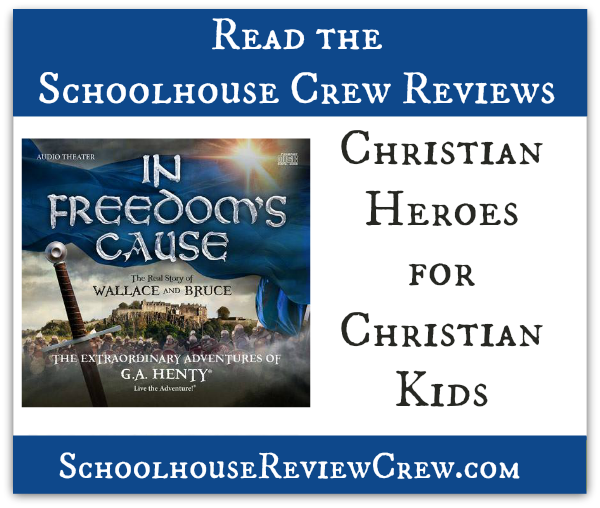 Heirloom Audio Productions has a passion for bringing real history to life. They produce active listening audio adventures. This is a new genre in audio listening. Plot rich with powerful sound effects designed to keep the listener captivated. The full audio theatrical presentation captures the imagination of children. Our crew received the  In Freedom’s Cause Single Package  – a new Audio Adventure based on the book, In Freedom’s Cause, written by George Alfred Henty (G.A.Henty 1832-1902). Listeners will travel through time with young Archie Forbes as he becomes involved with Scotland’s most influential freedom fighters William Wallace and Robert the Bruce.

In Freedom’s Cause a beautiful 2 CD set with an insert filled with ideas and a copy of the prayer by William Wallace.  A theatrical performance by Joanne Froggatt (Downton Abby as Anna), Billy Boyd (Lord of the Rings, Master and Commander), Skandar Keynes, (Chronicles of Narnia), Cathy Sara (Woman in Black, Topsy-Turvy), and James Cosmo (Highlander and Braveheart).  Your child will join with the faith and vision of William Wallace to join with farmers, shepherds and merchants to defeat a mighty army. You’ll learn about the faith of William Wallace, his courage and strength of character. Walk along side them as they forever change the history of Scotland.  King Robert the Bruce was inspired to eventually gain Scotland’s freedom. Learn the real history of the faith Wallace had in God.  Included in the CD is Psalms 23. Wallace, at his execution, read these words as King Edward’s men tortured him. Let your children learn that freedom is worth fighting for.

Two hours of Non Stop Adventure for ages 6-Adult “Building the next generation by brining the lessons of history to life” through Listening captivating the imagination. Time Travel into fun and exciting adventures. Teach strong moral values like courage, conviction an Character. 48 page Study Guide included to help parents engage with their children.

In Freedom’s Cause Study Guide (Digital Download) – 30 pages of discussion points encouraging you you to Listen Well, Think Further and Define Words. This will guide you through the history and tie the story to related Bible study. This eStudy Guide is designed to give educators a complete story curriculum.

In Freedom’s Cause Soundtrack (MP3 download) contains all the original music by Emmy-winning composer John Campbell. You may be familiar with John’s original core for C.S. Lewis’ The Chronicles of Narnia. This music is moving and draws in the listener. You may enjoy this downloaded MP3 Audio-Theater Soundtrack on your devices!

Printable copy of The Prayer Of William Wallace is a version of Psalm 23 in the Latin Vulgate. This printable copy is a one page beautiful printable letter size poster ready to frame for your family’s inspiration.  Heirloom Audio Products shares that, “When read in the studio by the man playing William Wallace, the other actors were genuinely taken aback by the character and depth of this mighty and ancient prayer.

Find In Freedom’s Cause on social media: A big thank you to Angie Wright, Pebblekeeper, for writing this introductory post.

4 thoughts on “In Freedom’s Cause Review”