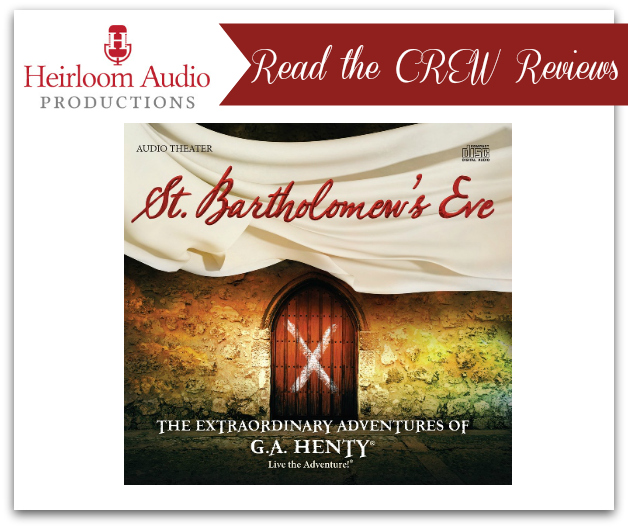 Heirloom Audio Productions have proved to be one of The Crew’s favorite vendors. They produce full audio theatrical presentations based on the literary adventures of G.A. Henty. They bring amazing and inspiring real-life history to right into our living rooms.

For this review, the Crew received St. Bartholomew’s Eve….the latest from The Extraordinary Adventures of G.A. Henty. We were given the choice of a digital or beautiful 2 CD set.

This story takes place in 16th century France. Protestant Christians, who were known as Huguenots, were being persecuted for their faith.

The story’s protagonist, Philip, traveled to France to aid his French uncle and cousin in their fight for religious freedom. Philip and his cousin, François, have many dangerous adventures. The story leads up to the dreadful events of the St. Bartholomew’s Day massacre of the Huguenots. The production gives families over two hours of faith-building adventures. It is intended for ages 6 and up.

Enjoy reading all the reviews below!

A big thank you to Rebekah from There Will Be A $5 Charge For Whining for writing this introductory article.