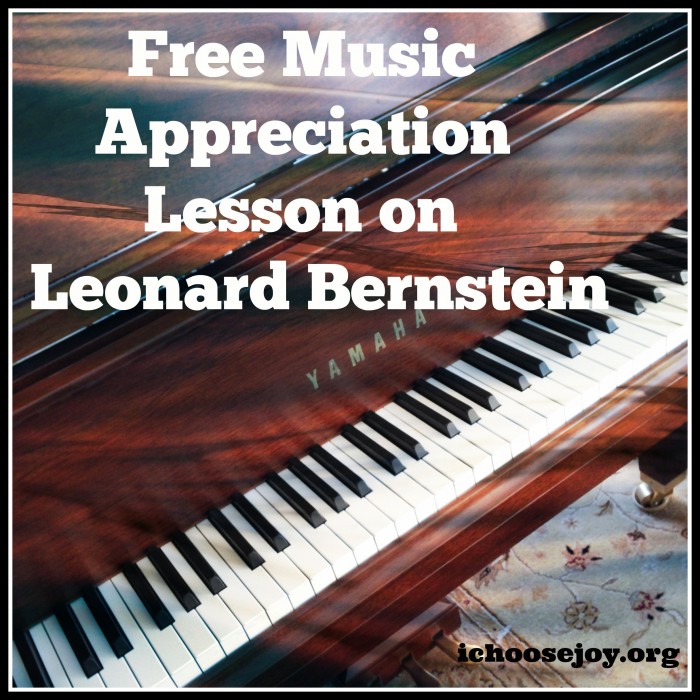 M is for. . . Music Appreciation. Today’s lesson is a really fun one about Leonard Bernstein. You’ll find information, links to websites and videos, and free printables!

Leonard Bernstein is known for 3 important roles in music: for being the first permanent conductor of a major American orchestra (he was eventually able to conduct all the major orchestras of the world), as a composer (of musical theater and other works), and as a music educator.

Leonard Bernstein was born in Lawrence, Massachusetts on August 25, 1918. He went to Harvard and was a talented pianist. His music is typical of the Modern Era in that it has different instrumentation (notice lots of percussion), rhythms, and harmonies from the previous musical style called the Romantic Period. He died October 14, 1990.

Bernstein was a very talented conductor, animated, and had great rapport with audiences. He conducted the New York Philharmonic for many years. You’ll see him conducting many of the pieces below if you watch the YouTube links.

As a Composer: (Use parental discretion about what age your students should watch the full musicals. Many contain adult themes. But the individual pieces or songs linked below are appropriate for all ages.)

“Symphonic Dances”; “I Feel Pretty”; Prologue from the movie version

As a Music Educator:

Bernstein televised his “Young People’s Concerts” for children and taught a generation of kids about classical music. Many of these are on YouTube and are very fun to watch. He demonstrates the concepts by playing the piano and by conducting the orchestra in front of an audience of children. Gena has been married 16 years is a homeschooling mom of 8 blessings, ages 14 down to 2. You can find her blogging about homeschooling, homemaking, and family life over at I Choose Joy! Homeschooling offers so many opportunities for fam

Dig deeper into your favorite books with Progeny P