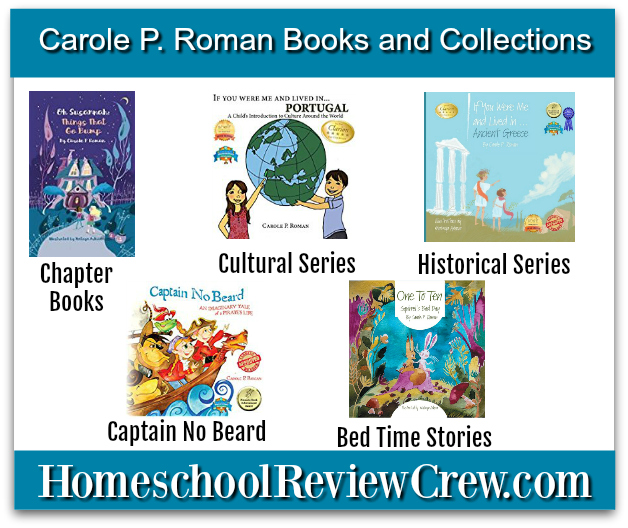 Books are a huge part of our homeschooling adventure.  They take us to places we many never physically travel to, they teach us, and they help us develop our imagination.  They introduce us to real life heroes, imaginary pirates and princesses, and other characters we can relate to.  These things are exactly what the Homeschool Review Crew found when we recently had the chance to review many books and collections from Carole P. Roman. Carole P. Roman began her writing career on a dare.  She created her first book, “Captain No Beard – An Imaginary Tale of a Pirate’s Life,” based on a game she played with her grandson.  That first book lead to several series of books that have won many awards.  Carole uses her teaching background, her love of exploration, and interest in the world around us to create her books.  She writes both fiction and non-fiction.  She has won several awards for her writing including the Kirkus Star of Exceptional Merit and Pinnacle Award among others.

Each member of the Crew was given the opportunity to select three books to read with their family.
These included choices from: If You Were Me and Lived In… Cultural series If You Were Me and Lived In… Historical series Thank you to Cassandra H. from A Glimpse of Normal for writing this introductory post.